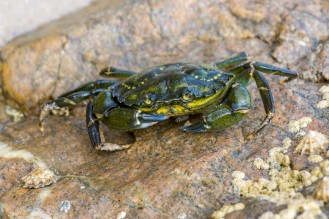 The European green crab (Carcinus maenas) arrived in the New York and New Jersey ports in the early 1800s, spread to Casco Bay by the 1890s, and continued to spread northward to Downeast Maine and the Bay of Fundy over the twentieth century (Fulton et al., 2013).  It is a voracious predator, but until recently the crab’s numbers in Maine were kept in check by cold winters. That was enough to make it possible for softshell clams to continue to thrive even though green crabs were eating them. All that has changed now that winters are warmer. Research by Dr. Brian Beal of the Downeast Institute, along with others (Beal, 2006; Tan & Beal, 2015), makes a strong case that the green crab has contributed substantially to declines in softshell clam populations in many parts of Maine.

Because CSI-Maine is designed to provide Maine communities with information they can use to protect clams from predators, knowledge about green crabs and their lifecycle is useful in interpreting the data we collect and in thinking about new approaches to increasing and sustaining the clam harvest.

Mating, Spawning, and The First Year of Life

The illustration below shows the key events in the green crab lifecycle. The timing of these events varies in different parts of the world because of differences in water temperature. In Maine, mating takes place between July and October, peaking in late summer. The female then carries the eggs over the following winter.  When winters are cold, this is a critical point in the crab lifecycle because egg mortality is high.  If the eggs make it through the winter, the female releases them as larvae in May and June. As is true for newly hatched clams, green crab larvae start out as very small plankton. They move up and down in the water column in sync with the tides, which enables them to move from the nearshore habitat into the deeper coastal waters they need to survive. In Maine waters, the larvae spend most of their first summer going through a series of larval stages until they finally become a megalopa. At this point, the larvae resemble small versions of adult crabs except that they still have a tail that they use in swimming. Then, each larva goes through one more molt where it loses its tail and finally becomes a juvenile crab that has a carapace width (cw) of about 2 mm. 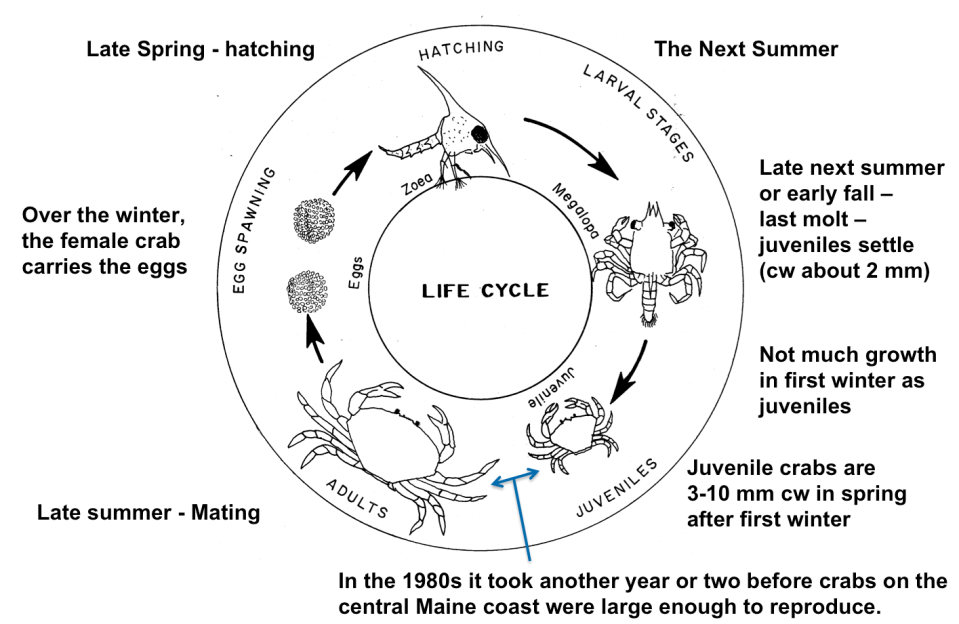 In Maine, this last molt happens in late summer or early fall.  They continue to grow until November when the water temperature drops to 7°C and the crabs stop feeding. A 1979 study found that the mean size of first-year green crabs in Boothbay Harbor was 5.5 mm cw at the start of their first winter (Berrill, 1982).  If the new crab survives its first winter, it emerges in the spring not much larger than it was in the fall.

Emergence and Reproduction of a Predator

In late spring (May-June), the one-year-old (second year of life) crabs begin feeding and growing again. This second summer is a time of rapid growth. At the time of Berrill’s (1982) study of crab growth in 1980, one-year-old crabs ranged in size from 9 to 20 mm cw when they began their second winter.  Because waters are now warmer in the summer and early fall than they were 40 years ago, it is likely that crabs are now even larger at the start of their second winter. The reasons for this are that the growing season is longer and the growth rate increases with water temperature.

Berrill (1982) found that female green crabs first became sexually mature and began bearing eggs when they reached about 34 mm cw. Consequently, in 1980, when Berrill’s research took place, females were first able to reproduce in their third year, when they were two years old. With warmer waters and faster growth, it is possible that some crabs in Maine are now able to reproduce in their second year, as is true in other parts of the world where the water is warmer.

Green crabs eat a wide variety of things, including algae, fish, gastropods (for example, snails), and other crustaceans, but their preferred diet is bivalves such as clams and mussels. Green crabs can adapt to a variety of habitats, but given the choice, their preferred habitats are places that are sheltered from wave action and that are warmer. Juveniles are most often found in seagrass beds and in rocks and other protected places in the intertidal zone. If mussel beds are available, they are a preferred habitat, particularly for older juveniles.

Adult green crabs migrate inshore and offshore with the tides. Seasonally, they migrate offshore in the winter in search of warmer waters, where they burrow in the bottom. Females tend to seek deeper waters than males.

Some Questions to Stimulate Thinking

In CSI-Maine we are primarily concerned about crabs because they eat clams.  Here are a few questions to get students’ thinking about the way the clam lifecycle and the crab lifecycle intersect.  These questions are also a good test of your understanding … if you can develop answers that you feel good about for these questions, you probably have a good understanding of the clam and crab lifecycles. Finally, these are not simple, one-answer questions since answers in the real world will depend on local conditions.

Green crabs have moved beyond Maine to Canada on the east coast, and have moved up Canada’s west coast as well.  One outcome of this relatively recent invasion of Canadian waters is a very readable and complete report, completed in 2007, on what is known about green crabs.  The link to the report is here.  Below is the complete citation.  This would be my first choice as a reference for students who are seriously interested in learning more about green crabs, including biology, ecology, and relatively recent thinking about management.

Klassen, G., & Locke, A. (2007). A Biological Synopsis of the European Green Crab, Carcinus maenas (No. 2818). Canadian Manuscript Report of Fisheries and Aquatic Sciences. Retrieved from http://www.dfo-mpo.gc.ca/Library/330845.pdf

Here are citations for the other papers that I used and reference in this report. These are more technical.  We can provide copies on request.

Beal, B. F. (2006). Relative importance of predation and intraspecific competition in regulating growth and survival of juveniles of the soft-shell clam, Mya arenaria L., at several spatial scales. Journal of Experimental Marine Biology and Ecology, 336(1), 1–17.

There has also been some good recent work on trapping green crabs, estimating relative density from place to place, and looking at the timing of reproductive cycles. These papers go beyond what we talk about in this brief lifecycle summary, but might be of interest to students wanting to explore more crab issues more deeply.  Let us know if you have a need for such research.